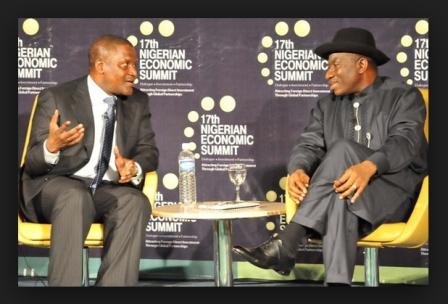 Africa’s wealthiest businessman, ranked the 28 richest man in the world by the Bloomberg Billionaires Index, has told a gathering of Africa’s business and political leaders gathered in Nigeria’s capital city for the World Economic Forum on Africa to consider creating jobs in the North East as a way of reversing the trend of insurgency and criminality in the Northeastern region of the country.

Dangote who is reported to be investing north of $15 billion  in Africa and other parts of the world over the next half decade, is considered the second most influential black man in the world, after President Barack Obama.

He said, “The only way to solve Boko Haram is to create jobs…

“Dangote Group will invest $2.3 billion in agriculture in the North, specifically in the area of sugar and rice production…

“Keeping money in offshore accounts won’t help Africa; Africans need to invest in Africa and build confidence. Africa needs to be careful not to import poverty and export its jobs.

“Five to Seven years ago, we didn’t know we’d be this big. Looking forward, we’re investing $16B.”