President Muhammadu Buhari has expressed great confidence that he will win the hearts of Nigerians once again should another presidential election be conducted.

Buhari in an interview with African Leadership magazine said: “Yes, I was elected by an overwhelming majority of Nigerians, and I am ever grateful for the opportunity I have been given to serve.

“However, I don’t consider the result of the so-called survey a slip in my public rating and acceptance. I appreciate the high expectations of Nigerians and as an administration we are working assiduously to deliver.”.

Nigerians both home and abroad have however reacted to the president’s confidence in the face of economic hardship and imbalance that has plagued the country in the last one year.

In reaction, Nigerians on social media did not mince words in registering their disapproval of the current economic condition, hence a reflection of the slip recorded in the President’s rating.

A social media user wrote: “In all sincerity nobody can GUARANTEE you on that, NOT EVEN IN KANO STATE WHERE NO SINGLE invalid vote was recorded during the 2015 presidential election.”

Another: “For your mind, you think that you are doing well. Even your wife may not vote you because according rumore, you have disappointed her feelings.”

Some more reactions which trailed the news report include:

“Out of your 3-point agenda, which have you achieved up to 30% that will make Nigerians vote for you again? Do you still hear shout “Sai Buhari” again? Keep deceiving yourself!”

“Y should Buhari come out and say this when most people are praying we av an election that can throw him out soon…..all we see is pics of him with his family on different occasions, his Liar Mohammed attending different occasions….when do they want to work,it’s better he faces reality fast and do something tangible before Nigerians throw him out.”

“This APC government is a fraud, any government that failed to solve the immediate problem of the masses is a failed government, people are dying of hunger, no security,no money even for the government, no good education anymore, mass unemployment, electricity is a total failure , the economy is upside down, no good life in any part of the country anymore, there is no money for capital projects but I have never heard that there is no money to pay the huge salaries of the law makers, the president,the ministers, and other federal government staff.May God deliver this country from the carbal of Apc”

“Dear Buhari, you will lose miserably in Benue, Plateau and Kogi if you contest today, in fact Southern Kaduna will shock you. Please be humble.”

“This man is not even reading d mood of Nigerians both in d North n South.He is hallucinating.On what premise should Nigerians vote him again?Are we to vote him again based on more insecurity,blackouts,joblessness and general hardship he has created?”

“Buhari is not seeing the handwriting on the wall. He now eats in gold plate and have suddenly forgotten that people like me fought for him on social networks, defended and supported his candidacy in 2015 but I would not fail to campaign against him if the APC or PDP field a candidate that is more credible than him with the way things are going economically. I won’t say I’m disappointed with him but come 2019 if things doesn’t improve drastically, he would be shown the exit door the same way we showed Goodluck Jonathan. Rubbish thing bragging that he’d win an election if it was held today. People are dying of hunger on the street, standard of living have reduced badly since he came on and he has the ordacity to brag he’d win an election if it is held today.”

Following the reactions, a quick online poll was conducted yet again by social media users to ascertain the claim by the President. The poll however came back with a 90 percent vote against the President’s claim. 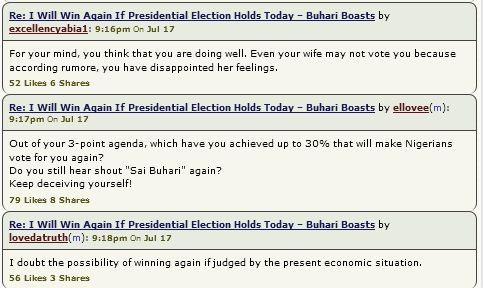 Robber Mistakenly Uses Charm On Himself During Operation