Speaking at the event, Tambuwal expressed delight at the timely passage of the budget document by the state House of Assembly.

He said now that it has become a law, its provisions will be diligently implemented for the benefit of the people of the state.

He said despite financial difficulties faced in the country last year, his administration did not falter in payment of entitlement to workers and pensioners.

“The Auditor-General for Local Governments is working to effect the payment of outstanding pensions and gratuities of local government staff and we will bring it up to date as well,” he added.

Tambuwal also promised to ensure the performance of the budget is better than that of 2016.

“The 2017 budget will be better than 2016 in terms of implementation, while even distribution of resources will be ensured. We will start new projects across the state, with much emphasis placed on rural areas,” he said.

In his remarks, Speaker of the State House of Assembly, Hon Salihu Maidaji, extolled the existing cordial relationship between the legislative and executive arms of government in the state.

He however stressed the need for improved internal revenue generations sequel to the dwindling oil revenues.

It will be recalled Tambuwal had on December 29, 2016 presented the budget estimate of the state to the House of Assembly amounting to over N204.3 billion, with highest sectoral allocation 27.3 percent allocated to the education sector. 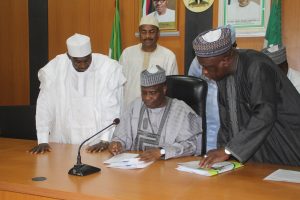 Where Is My President?

Zulum Presents Staff of Office to New Emir of Biu