A young lady has been delivered of a set of twins just about a month after she had a baby boy. Interestingly, the Bangladeshi lady, Arifa Sultana is just 20 years-old.

According to her doctor, Sheila Poddar, Arifa had given birth to a boy in February and had gone back home to start her postnatal care, only for her to be rushed back into the hospital on March 22.

The news that she still had some babies in her shocked everyone and when she had the cesarean section, she was delivered of another baby boy and girl. 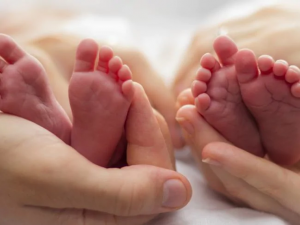 According to her doctors, she had a very rare condition where a single person has two Uteruses. The condition is referred to as Uterus Didelphys.

The National Institutes of Health explained that it is an uncommon congenital abnormality and in fact, the ratio that such a condition would produce a set of twin is one to a million

NZ Herald also reported that the twins were not housed in the same womb as the other baby.

Meanwhile, Arifa did not know she had the condition and was also pregnant with a set of twins until she had an ultrasound scan after giving birth to the first baby.

Doctor Poddar further explained, “It’s a rare incident. I have seen such a case for the first time. I had not even heard about such an incident before.”

Vendor dies from electrocution after trying to assist another victim

2021 budget: Gbajabiamila vows not to grant approval without provisions for EndSARS…