20 Injured As Van Rams Into Pedestrians On London Bridge

Up to 20 people are feared to be injured after a van reportedly ploughed into pedestrians on London Bridge.

TheCable.ng reports that the vehicle mounted the pavement at the scene in central London this evening, according to shocked witnesses. 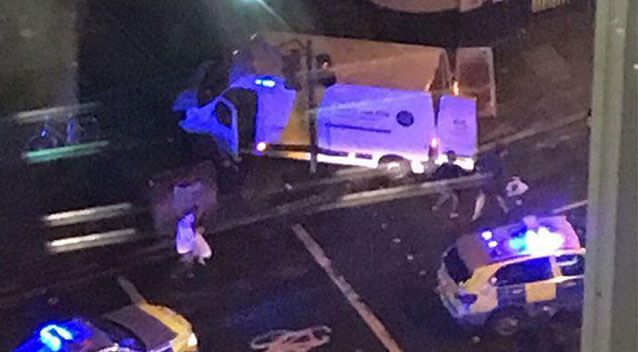 It comes just two months after an attacker mowed down pedestrians at Westminster Bridge before stabbing an unarmed cop. Five victims were killed in the attack.

There are unconfirmed witness reports from the scene at London Bridge tonight that people may have been stabbed.

A witness told Reuters she saw people with apparent knife wounds on the bridge.

The agency said a witness had said she saw three people with what appeared to be throats cut.

Holly Jones, a BBC reporter at the bridge when the incident happened, said a van had swerved off the road into a crowd of pedestrians.

“A white van driver came speeding – probably about 50mph – veered of the road into the crowds of people who were walking along the pavement,” she told BBC News.

“I’d say there are about four severely injured people.

“They all have paramedics assisting them at the moment.”

A Downing Street spokesman said: “The Prime Minister is in contact with officials and is being regularly updated on the incident at London Bridge.”
One man at the scene tweeted tonight: “Horrific scene at London Bridge… bodies strewn over the pavement. B&Q van mounted the pavement.”