2023 general election: Who are you voting for?

Who will be Nigeria's next president?

With less than 50 days to Nigeria’s general election which is one of the biggest and anticipated elections, citizens have been going to collect their power card; their Permanent Voters Card (PVC).

It is your power card, because with it you can elect the next president, governor, senator, and even the next local governor.

The Independent National Electoral Commission (INEC) has distributed the PVCs to the electoral wards to make the collection process easy and swift.

Your duty as a citizen is to get your PVC and vote without being influenced by the wrong things or corrupted.’

Any party that offers you money or anything in exchange for your vote is a corrupt party and will definitely ruin the future of Nigeria; your future and that of your family if elected.

So before you collect that bribe, think of your future and that of your family.

Election happens every 4 years so you will be stuck with the corrupt leader who will not remember you once elected. How do you intend to survive?

Free and fair election does not include ballot snatching, bribing or bullying. Do not be persuaded to vote for the wrong person.

Whatever it is that you will be giving will only last for a short period but the suffering will last 4 years.

Think carefully before you vote.

Vote for the best candidate not ethnicity or religion. Critically access the candidates and pick the best.

Remember a party that plans to steal ballot boxes or bribes voters is not a transparent or ideal party. 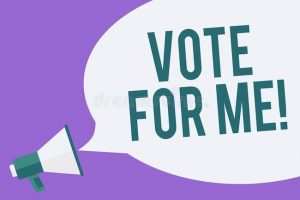 The table below contains the presidential candidates, their running mates, their ages, political parties and their qualifications.

The election is less than 50 days away, get your PVC, analyze the candidates, resist bribes and vote for the right candidate.

Remember the fate of Nigeria relies on your unbiased vote. And election only occurs every 4 years.