According to EFCC, a sum of about $ 218 billion has been moved out of the country between 1970 and 2008. The Financial crimes commission explained that all the arrests, prosecution and retrieval it has made in the past give credence to the figures.

Tony Orilade, a spokesperson for the acting chairman of the commission, Ibrahim Magu, gave the insight when he attended a program organized by Online Publishers Association of Nigeria, in Abuja.

He emphasized that corruption is not just peculiar to public sectors in Nigeria. The private sector is not left out too. He also explained that some of the corruption cases have involved groups of people and companies who collaborate together to carry out the vicious act. 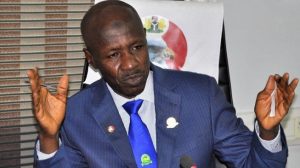 The spokesperson further said, “The alarming rate of corruption committed by these unpatriotic elements can be partly seen in the number of convictions secured by the EFCC from Nigerian courts since I assumed duty as the head of the commission in 2015.

“One of the most graphic ways through which the absence of democratic accountability manifests itself in Nigeria today is through the prevalence of rampant corruption at all levels of governance. For example, Transparency International reported that Nigeria was the most corrupt country in the world for years: 1996, 1997, 2000 and second in the line for remaining years up to 2003.

“In February 2015, a high-level panel on illicit financial flows from Africa constituted by the African Union, under the chairmanship of a former President of South Africa, Thabo Mbeki, revealed that Nigeria ranked first among ten African countries by cumulative illicit financial flows between 1970 and 2008. The total outflow from Nigeria for the period was $217.7bn constituting about 30.5 percent of Africa’s total share.”

Video: Transwoman who overreacted in a game store insists she wants to be called “ma’am”

Photos and Videos from SimiAdekunle 2019 Surface as “Promise” Drops