No fewer than three cars filled with supporters of the All Progressives Congress (APC) heading to Katsina to attend a welcome rally for Senator Remi Tinubu, wife of the presidential candidate, Asiwaju Bola Tinubu, have gone missing.

A Zamfara-based journalist, Abdul Balarabe, made this known in a tweet on Wednesday, November 30.

Senator Remi Tinubu represented First Lady Aisha Buhari at the flagged off of the North West women campaign train for the Tinubu/Shettima presidential ticket at the People’s Square in Katsina on Wednesday.

Two daughters of President Muhammadu Buhari, Zahra and Hanan, were among other notable figures that attended the event.

Balarabe said that the vehicles went missing on Zamfara-Katsina road en-route the rally.

He said that the occupants of the vehicles were “kidnapped”.

“They were kidnapped along Zurmi – Jibia highway while moving to katsina for a rally to welcome the wife of the APC presidential candidate Asiwaju Bola Ahmed Tinubu. 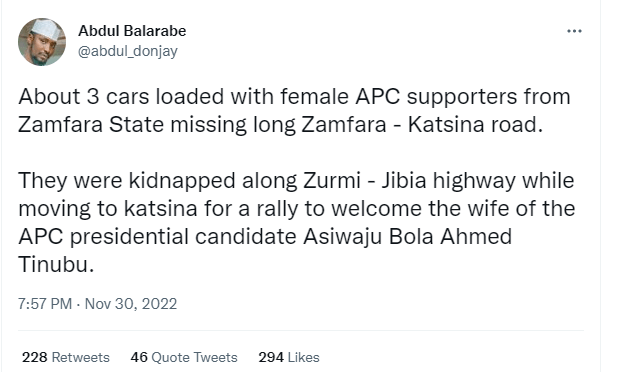 How President Buhari Dazed Us, By Gov Badaru Abubakar Of Jigawa State