There is an ongoing battle of beliefs between renowned men of God as Pastor Matthew Ashimolowo openly disagreed with Pastor Chris Oyakhilome’s theory which implied that Fifth Generation (5G) network is the product of Anti-Christ.

Pastor Matthew Ashimolowo of the Kingsway International Christian Center (KICC) during his Sunday sermon told his online congregation to disregard theories and speculations creating a link between 5G and the dreaded Coronavirus disease.

Ashimolowo who claimed not to be a Scientist disclosed the world is not ready to embrace change. This is because anytime there is a major global shock or development, people are quick to condemn it as the work of Anti-Christ.

He made reference to Napoleon, Benito Mussolini, Hitler who were all initially regarded as Anti-Christ.

This is coming after Founder of Christ Embassy, Pastor Chris Oyakhilome during a sermon told his congregation that there was a link between 5G Network and Coronavirus.

Quoting Revelation 13, the Christ Embassy founder said  Anti-Christ plans to create anew world order which would entail one government, one world religion and one world economy. He used a graph to illustrate his theory. 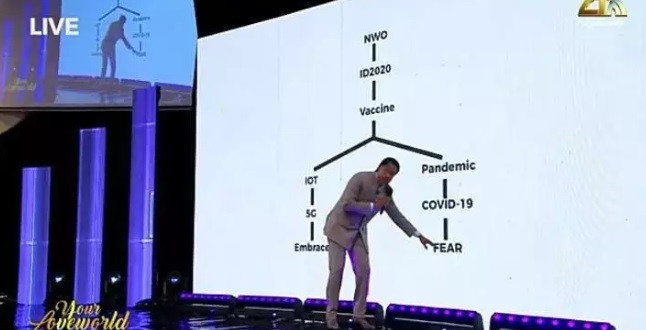 Meanwhile, Pastor Ashimolowo expressed his disappointment that a man of God would go to such length to mislead people.

CAN commends Senate for reverting to electronic voting, transmission