Britain’s longest-reigning monarch, the Queen of England breaks the Internet as her bikini photo surfaces online.

The 90-year-old monarch was all smiles as she rocked a colourful and stylish bikini to the beach with the sun smiling on her skin. 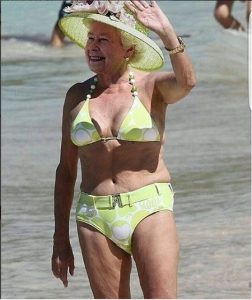 Queen Elizabeth II has been Queen of the United Kingdom, Canada, Australia, and New Zealand since 6th February 1952.

Elizabeth II of Great Britain is the longest-reigning monarch in British history. She celebrated 65 years on the throne in February 2017 with her Sapphire Jubilee.

Buhari may not return as Nigeria’s President – Primate Ayodele