Italians clubs, Ac Milan and Inter Milan will not be using their iconic San Siro stadium any longer as plans to demolish it has already begun.

The football arena which was commissioned as far back as 1926, has been home to the two Italian football clubs.

While Milan had been hosting its matches in the stadium since inception, Inter Milan made it its home stadium 19 years after.

San Siro, whose capacity for spectators is over 80,000, will now be substituted by another stadium that is currently being built next to it.

However, football matches will still be played in the stadium until the completion of the new one. 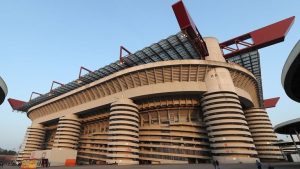 The speculations about the demolition have been flying around for a while and earlier this month, Beppe Sala, the Mayor of Milan, hinted at the new project.

He said, “I’m waiting to see the proposal from Inter and Milan. Hopefully, it’ll arrive before the holidays. In my opinion, the San Siro is a wonderful facility.”

Now, while confirming the development, AC Milan’s president, Paolo Scaroni expressed his worry about the cost of constructing a new stadium.

Scaroni stated, “Building a new stadium is a very expensive undertaking, but I don’t want to influence anything.