After turning down 42 marriage proposals, woman finally marries at 72

A seventy-two-year-old woman has finally married her boyfriend who she’s been with for over forty years. Pauline Young, who is now 72 years, decided to ask her boyfriend, Colin Jones, for his had in marriage last December. Colin had always tried to marry her since they met in 1976 but Pauline turned him down on every occasion. Eventually, he got tired of trying and accepted thing the way they were between them.

However, to his surprise, the Pauline turned to Colin and asked him herself. The couple then officially got married in February.

Although Pauline now stays in a care home in Telford, Pauline visits her regularly so they can spend some time together. 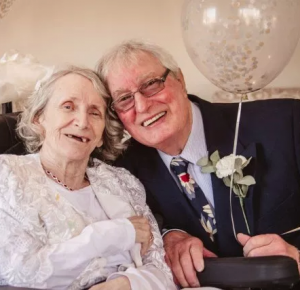 Speaking on his reaction when she asked him to marry her Colin, said, “

“When Pauline asked me, I almost fell off the bed. I’d been asking her all this time so now she was asking me, I said: “of course I will”. We literally lived and worked together for 43 years, I have been floating on air ever since.”

“People say they’ve been together years but really they have maybe an hour before work and then they see each other in the evenings – we were always together. When we saw each other it was instant, we fell in love – hook, line, and sinker. The magic of life allows you to meet people like Pauline, our marriage was a combination of our 43 years together.” 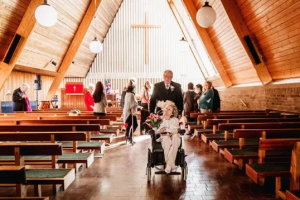 Pauline and Colin had been in other relationships before they met. They both have five children from their exes. When things became serious between them, they relocated to Powys in Wales and started the business of making cabinets.

Since then, the couple lived happily, even though they never got married until Valentine’s Day this year.

Stranger forces himself into woman’s car, attempts to rape her

Angbo: Knocks for Ortom over “reconciliation” of Channels TV reporter,…