Again, 50 Cent hits out at Wendy Williams, calls her “monster”

Rapper and producer, 50 Cent seem to have moved from his beef with Mayweather to Wendy Williams as he has continued to hit out at the TV host on social media.

Recall that multiple news agencies had reported that Wendy had planned to attend a show organized by 50 Cent last weekend but was bounced and denied entry into the venue – BarCode in New Jersey.

In his latest attack, 50 Cent took to his Instagram account shared an image Tiffany Haddish took with Wendy, asking the former to be wary of the “monster” behind her shoulder.

His caption reads, “Tiffany wait, there’s a monster on your shoulder don’t move. What ever you do don’t look to your left. LOL, Ugly motherfucker.”

Seeing that he had gone too far with the caption, some of his followers quickly expressed their thoughts, asking 50 Cent to quit shading Wendy Williams. 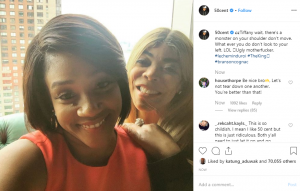