Again, two BRT buses ram into each other, many passenger injured (photos)

Two government-owned commercial buses, popularly known as BRT, have been involved in a head-on collision which left many passengers injured.

The incident reportedly occurred on Monday, at around Asolo at the Ikorodu area of Lagos State.

At the time of this report, the number of persons injured is yet to be ascertained but eyewitnesses have revealed that many passengers inside the two buses were severely injured but had been taken to a hospital for proper treatment.

Despite occurring within the BRT lane of the road, the accident has since led to heavy traffic along the route as other commuters had to rush to the scene.

Recall that a similar incident involving a BRT bus and a Dangote Cement truck occurred just last week. Many passengers were grievously injured at the time too.

See photos from the latest accident below. 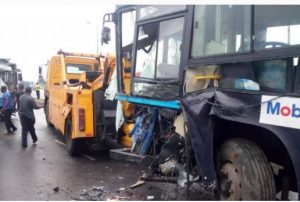 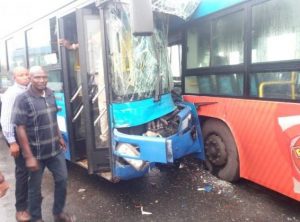 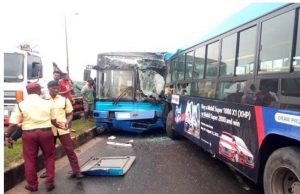 Also, read: PDP to Buhari: No world leader wants to do business with you as president