According to him, Akpabio got all funds to construct the fence of Federal Polytechnic Ukana, Akwa Ibom, (N200 million), and Federal Government College, Ikot Ekpene (N100 million) yet executed zero project.

A letter obtained by The Cable showed that Akpabio representing Akwa-Ibom North-West got the contract in 2017.

The 300m contract excludes separate N150m which were funds for the entrepreneurship training on the use of modern farming implements for youths and women of Akwa Ibom north-west senatorial district.

Another 50million was paid for the renovation of a school hostel in University of Nigeria, Nsukka. 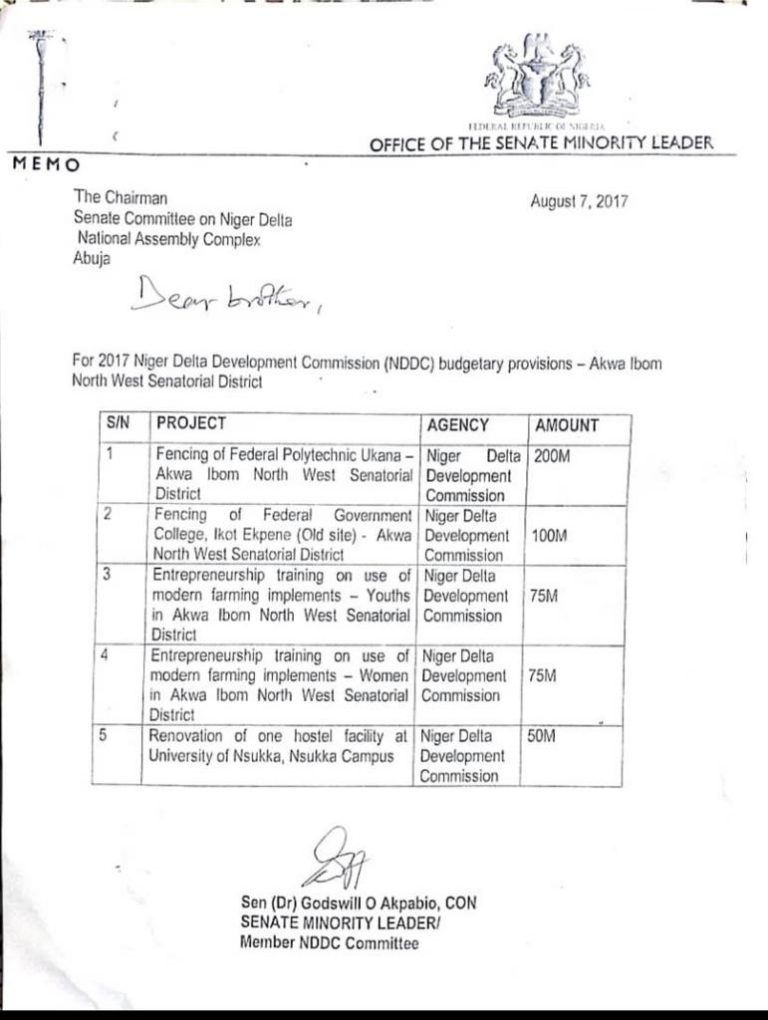 Addressing Journalists on Wednesday, Sen Nwaoboshi disclosed that none of these projects were executed

“Findings show that while there was no physical evidence of implementation of these projects, checks show contracts were awarded and fully paid for,” Nwaoboshi said.

“Such practices have turned the region to sites of abandoned projects.”

It would be recalled that Sen Akpabio lamented over constant political interference in NDDC, accusing unknown persons of enriching their pockets, leaving a trail of abandoned projects.

He made this known shortly after  President Buhari ordered a forensic audit of the commission from 2001 to 2019.

“We have also had a lot of political interference, people have not allowed NDDC to work as it ought to, people coming with ideas not to move the region forward but to move their pockets forward. It has always been so… I think people were treating the place as an ATM, where you just walk in there to go and pluck money and go away, I don’t think they were looking at it as an interventionist agency,” Akpabio had said.

Is Quarantine Killing Your Relationship? 6 Tips to Prevent a COVID-19 Divorce