Photos of Senator Godswill Akpabio laughing with the political juggernauts of the main opposition party in Nigeria, PDP about 14 days ago emerge. 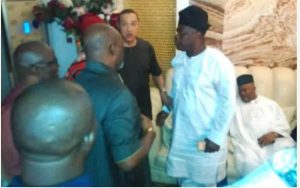 The meeting held at the Abuja home of the Deputy Senate President, Ike Ekweremadu.

Senator Godswill Akpabio formally defected to the national ruling All Progressives Congress (APC) at a mega rally held at the Ikot Ekpene township stadium on Wednesday.

Nigerians have been urged to follow the politicians with caution and not engage in bitter politics. 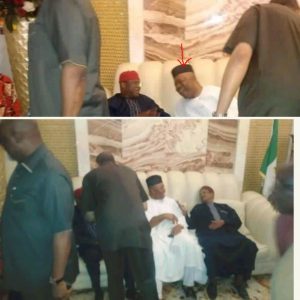 No fewer than 30 APC’s senators and members of National Working Committee (NWC) were on hand to receive the ex-senate minority leader, Akpabio.

The senate Majority leader, Sen. Ahmed Lawan, who introduced his colleagues spoke on Akpabio whom he described as a nationalist and patriot who believes in Nigeria’s unity.

In 2002, he was appointed Honourable Commissioner for Petroleum and Natural Resources by the then Governor Obong Victor Attah in Akwa Ibom State.

Between 2002 and 2006, he served as a Commissioner in three key ministries: Petroleum and Natural Resources, Local Government and Chieftaincy Affairs, as well as Lands and Housing.

In 2006, he aspired for the governorship of Akwa Ibom State in a hotly contested primary election and defeated 57 other aspirants to emerge the candidate of the People’s Democratic Party (PDP).

His campaign with the slogan, “Let God’s will be done” received mass support and was elected Governor in 2007.

SUGGEESTED READ: Akpabio Visits President Buhari In London as He Defects to APC