Al-Qaeda chief Ayman al-Zawahri has chillingly surfaced in a video on the 20th anniversary of 9/11 – despite claims he is dead.

Footage surfaced in the early hours of Saturday, as the world commemorated the lives of the 3,000 people killed in the atrocious 2001 terrorist attack in the US.

While Al-Zawahri was said to have died of illness in November last year, a new 60-minute video has emerged of him.

Footage shows him praising Al-Qaeda militants for a raid on Russian forces in Syria, which happened in January, so after his alleged death in November.

The SITE director analysed the video on Twitter saying: “Amid rumours of his death, al-Qaeda leader Ayman al-Zawahiri shown in the new 60-minute video, this time offering some evidence that he is not dead–a particularly, reference to events after December when rumours of death surfaced.

“However, Zawahiri doesn’t mention Taliban’s Afghanistan victory, and his talk of the US “making its exit from Afghanistan” could have been said early as Feb 2020 upon Doha Agreement. 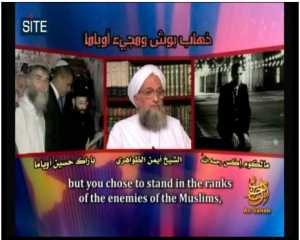 “Thus, he could still be dead, though if so, would have been at some point in or after Jan 2021.”

Katz concluded her analysis saying: “Intelligence agencies have, as of yet, offered no proof or solid assessments that Zawahiri is dead, leaving the question of his current status in the air.”

She went on to warn that “al-Qaeda and the jihadist landscape has been transformed” in recent weeks as “they’ve expanded propaganda and recruitment campaigns, celebrating what they see as their biggest victory since 2001: Taliban takeover of Afghanistan.”

Four planes were hijacked by Al-Qaeda members on 9/11, two of which hit the two World Trade Center towers while one hit the Pentagon. A fourth managed to be diverged by heroic crew to a field in Pennsylvania.

Now al-Zawahri, the successor to Islamist extremist and mastermind of the sickening attack Osama Bin Laden, has surfaced in a chilling newly-released video praising his group.

Al-Zawahri became leader of the terrorist organisation in 2011 when Osama Bin-Laden was shot dead by US forces after years of him being the most-wanted man in the world as the perpetrator of what to this day remains the most traumatic event of the century.