The family of Lt Adeyemi Sowole, the co-pilot on the ill-fated Naval helicopter that crashed on Saturday in Bayelsa State has accused the Federal Government of treating only the personalities that died on the flight and treating the other victims as nonentities.

The elder brother of the co-pilot, Taiwo, said this on Tuesday at their 28, Akintoye Street, Iyana Ipaja, Lagos home while receiving sympathisers.

The deceased’s brother said, “All lives are equal.  At this point, the right thing to do is for the government to treat all the victims with respect and give them the same recognition.

“But it seems as if only the dignitaries on board the helicopter died. Adeyemi is also important.

“Adeyemi and a senior colleague lost their lives also. They are equally precious to their families. It was their responsibility to transport the dignitaries even though their own lives were on the line.”

An aunt of the deceased broke down in tears while lamenting that while the news was circulating, the government only focused on Yakowa and Azazi, as though their son was unimportant.

“It’s like the people in government see our son and his colleague as unimportant. Is it only Azazi and Yakowa that died in that crash? Why can’t they sympathise with us as well? The incident happened and all they were talking about were the two government officials on board,” she said.

Adeyemi was the fifth out of seven children born to his parents. His brother, Taiwo described him as humble who loved his job. He recalled how they used to call him ‘Yepa olopa (policeman) because he behaved like one. His admission into the Nigerian Defence Academy was a dream come true, and no one expected that he would die doing what he loved most: flying.

Adeyemi graduated from the NDA in 2005 with a degree in Geography and trained as a pilot.

Taiwo said that he last spoke with his brother about 10 days before the crash, when they discussed plans for their father’s 80th birthday in March 2013. 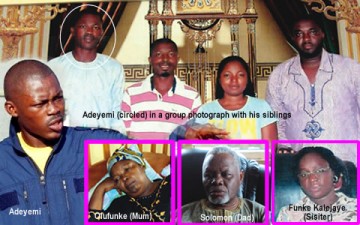 Two of Adeyemi’s siblings, Owolabi and Aderonke, are still yet to come to terms with the death of their brother.

Aderonke, who was her brother’s “pet,” broke down in tears as she described the last time she spoke with him.

She said, “Anytime he was coming home, I would ask what he wanted to eat and he would say ‘you should know because you are my mum.’

“Few days before the incident, I asked if he was coming home for Christmas and he jokingly said ‘no’. I told him he dared not. He said he would come and I was looking forward to seeing him. I still wish all this noise about his death is just a rumour.”

COVID-19 is Avoidable if we Comply with Preventive Measures – Okeke