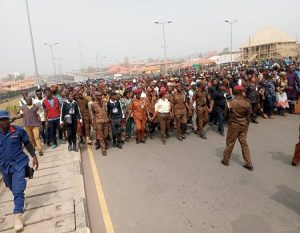 According to a report by The Tribune Newspaper, the solidarity rally which held in Ado-Ekiti, Ekiti State capital, on Tuesday, had thousands of protesters marching from Fajuyi park through Okesa junction, to the renowned Erekesan market and Ijigbo area of the city.

“Amotekun has come to stay in south-west Nigeria. We are not fighting anybody. The security of our people is very important. We are to do this to support our governors that we are happy with Amotekun.

“It is sad that our people were being killed and kidnapped and many of this carnage were without arrests. We are daily living in fear of being killed and these and many more are the reasons for the formation of Amotekun.

“On the proscription of Amotekun by the Attorney General and Minister of Justice, Abubakar Malami, we are of the opinion that the Minister only expressed himself as a private citizen who is entitled to his own opinion. We charged our governors to remain focused, we advise our leaders to desist from politicising Amotekun and that our security should be of priority.”

Chief Niyi Ajubulu, leader of the delegation of Ekiti Council of Elders, who was also present expressed how deeply regretful it is that insecurity was on an increase in the region.

“We have to be vigilant in this zone. Amotekun has landed and we must cooperate with them. Whoever that is averse to the formation of this outfit is satanic,” Ajubulu said.