The Nigerian Minister of State for Aviation, Hadi Sirika, on Wednesday, 18 July 2018, unveiled the name and logo of the new National Carrier, Nigeria Air at the ongoing Farnborough International Airshow in London.

Speaking at the unveiling event, attended by prospective investors, airline manufacturers, strategic partners and government delegates, the minister revealed that the Nigerian government owns only a meagre 5% equity of Nigeria Air, therefore, it would be run as a private entity.

This information aroused mixed reactions from Nigerians. While some thought it would ensure that Nigeria Air does not face the same fate as its predecessors, others thought it was just another stunt by the government to score cheap points in lieu of the upcoming elections.

While the government focused on dazzling Nigerians with the idea of a potentially successful National Carrier, they obviously did not cover all grounds before launching the surprise Nation carrier, Nigeria Air. A Nigerian youth took the initiative and bought all the domain names online and put them up for resale.

As of July 18, 2018, the day of the unveiling, NigeriaAir.ng andNigeriaAir.com.ng were still available until a rather smart individual named Olumayowa Elegbede bought them. He has now put both domains up for sale at $66,489 (about ₦24 million) each.

Bear in mind that NigeriaAir.com andNigeria-Air.ng have also been taken.

Perhaps, these are indications that people who think Nigeria Air is a hoax may be on to something after all. On the other hand, it might just be another classic case of the government putting less importance on having an online presence.

As it stands, the government has two options; to buy the domain names from Olumayowa or to include Nigeria Air in the gov.ng sponsored top-level domain. The latter is very unlikely since the carrier would be run as a private entity.

Also, failure to buy the domains would put prospective clients at the risk of being misled and defrauded because NigeriaAir.ng or NigeriaAir.com.ng would be the default go-to places for many people.

Therefore, it is safe to say that Olumayowa would be cashing out soon, even though he’d only be getting a fragment of the ridiculous amount we imagine would be budgeted to develop the National Carrier website.

See the domains below: 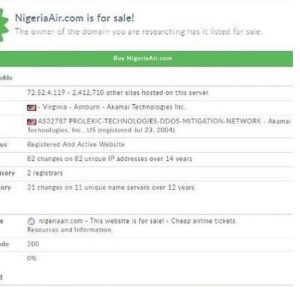 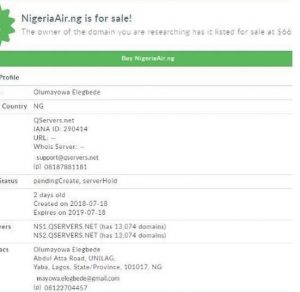 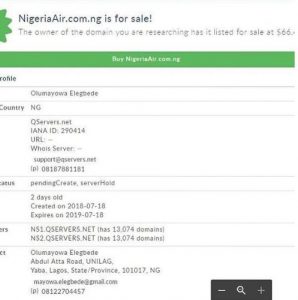 IPOB: Our people being killed in S/East since 1992 – ACF tells FG