Another gun factory uncovered in Benue

Officers of the Nigeria Police Force in Benue have successfully uncovered yet another site where firearms are being produced in Rivers State.

This time, the factory was located at Ikache village in the Oju Local Government region of the state.

At the scene, different forms of ammunition which were undergoing manufacturing processes were seized and confiscated. Also, one Orohu Akodi was arrested in the process.

Orohu, 37,  is said to have been the main manufacturer in the factory who upon interrogation, revealed that he was married and had five kids residing in Lagos.

Just over two months ago, officers of the Operation Whirl Stroke equally discovered a gun manufacturing factory in the state.

During the parade of Orohu as well as 18 other criminals arrested in the state, Mr. Gaba Mukaddas, the Benue State Police Commissioner, revealed that the police received intel concerning the factory and quickly acted on it. 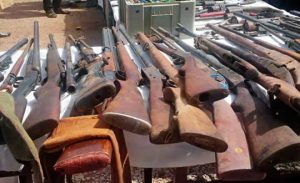 Gaba said, “We gathered the information that he manufactures prohibited fire arms and supplies same to criminals. Our investigation led to his arrest and a search in his house led to the recovery of three assorted live ammunition, two empty shells of expended ammunition and parts of locally made guns.”

Meanwhile, Orohu in his confessional statement, said, “I have been in the business of manufacturing guns for over seven years though I hardly stay at home, I always travel to Lagos because my family resides there.

“Most of the guns I made were for people from Cross River State. When they had their crisis sometime back, some of the people needed guns and they approached me to manufacture for them I did and I sold each to them for as low as N7,000.”

Police decry stoning of its officers by IPOB

Buhari’s second term: Ain’t no stopping us now, we’re on the move – by Femi Adesina