Emerging reports have claimed that a new airstrike has killed Shibl al-Zaydi, a leader in PMF, a terror militia controlled by Iran as well as several others.

The Herald gathered that the new strike happened in Northern Baghdad.

It was learnt that an initial airstrike had earlier killed a top Iranian general, Qasem Soleimani at the Baghdad International Airport in Iraq.

A security alert issued by the US embassy in Baghdad and the State Department after the airstrike, called on all American citizens to leave Iraq immediately.

It was earlier reported that powerful Iraqi militias backed by Iran on Monday said that U.S. airstrikes in western Iraq had left 25 militiamen dead and 50 others wounded, thus increasing Sunday’s death toll.

On Sunday, the U.S. military said it carried out “precision defensive strikes” in Iraq and Syria against the Kataib Hezbollah militia group, which was blamed for an attack earlier this week that killed a U.S. citizen.

“The strikes targeted five sites in total: three in Iraq and two in Syria,’’ the Pentagon said in a statement. Following the attack, Iraq’s Hashd Shaabi militia, the umbrella group of Kataib Hezbollah, said the U.S. bombing left 19 militiamen dead and 35 others wounded. 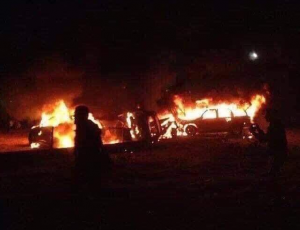 Pictures Of The Scene Where Iranian General, Soleimani Qassem Was Killed By US Drone