His death comes just days after his colleague Mr Latin announced that he was suffering from kidney failure.

Latin had called on Nigeria to provide financial aid.

The comedian later announced his death on Saturday night.

He had earlier been reported to be responding to treatment gradually and was expected to be back on his feet.

Adesina was more popularly known as Pastor Ajidara for his role in Abela Pupa. 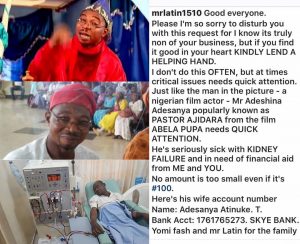 Obanikoro mules over decamping to APC

Why I don’t act, speak or behave like a normal governor – Okorocha