Not long after a South African Returnee was arrested in Enugu state for his involvement in a robbery attack,  another  Returnee who returned to the country few weeks ago on a free Air Peace flight, has been arrested for disposessing a Laptop Dealer of three Apple laptops (Macbooks) at gunpoint. 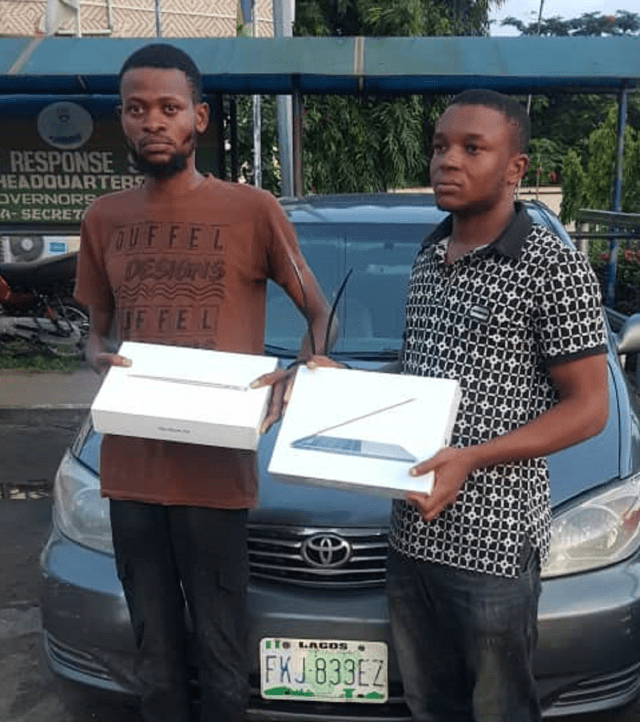 Operatives of the Rapid Response Squad (RRS) arrested 27-year-old Victor Remi and 24-year-old Ekeh Maxwell who posed as Forex Trader and a Managing Director/Driver of an unnamed company to deceive their unsuspecting Laptop Dealer.

The criminal duo who both reside on 18, Alexander street in Abule-Egba, during interrogation confessed how they both found their victim via Twitter.

The South African Returnee Remi, in his confession statement said “I told the dealer I was the Managing Director of a new company on Acme Road, Ikeja. I also told him that my daughter recommended him and that his laptops were good. I ordered one for myself and another for my secretary and told him to bring them.

“It took us a week to initiate, perfect and execute the plan. My colleague, Maxwell, borrowed his brother’s Camry car (FKJ 833 EZ) for the deed. We bought a toy gun and painted it. I told the dealer to meet me at Acme Crescent because we knew the location was a desolate area”.

” While Maxwell drove, I sent the dealer a message on WhatsApp to bring the consignment to my office, last Monday. I told him that my driver would pick him up at Acme Crescent.

“Maxwell picked him at the designated point, while I joined then few meters from where he entered. He (dealer) sat in front with the laptops. Immediately I entered, I placed the gun on his neck and ordered him to surrender them. We wanted to take his phone too but he pleaded not to be stripped of everything. We told him to alight from the car and we zoomed off”.

Investigative reports revealed South African Returnee Remi was not completely truthful with his partner in crime,  as he told him, the laptops stolen were two instead of three. Also, Returnee Remi told his accomplice in all dishonesty,  he sold the laptops for N250,000 instead of N500,000.

Maxwell could not hide his disappointment after finding out his accomplice Remi sold three laptops for N1.5million when he was just given N250,000 as his share.

The Laptop Dealer who pleaded for anonymity, said Maxwell gave his name as Uche when he approached him via Twitter.

The Dealer said he had no idea he was talking to Robbers when they began communicating via WhatsApp and that the hoodlums dispossessed him of the laptops using a knife and gun.

The Police played a crucial role in the recovery of the stolen laptops from their respective buyers.

CP Zubair Muazu, the Commissioner of Police for the Lagos state Police Command has urged youths to put a moderation  in the personal details they put on social media platforms, so as not to make them targets of criminals such as the likes of South African Returnee Remi and accomplice.

CP Zubair also reiterated the commitment of the Lagos state Police Command to apprehend criminals and make sure they face the wrath of the law.

No contest as Chelsea beat Southampton on the road