The professional boxer, Khan, took to his social media page to accuse the Heavyweight boxer, Anthony Joshua, who defeated Ukrainian veteran boxer, Wladimir Klitshko, of sleeping with his wife.

Following the infidelity accusation, the boxer’s wife took to her social media page on Twitter to reply her estranged husband.

Khan’s first tweet aimed at exposing his wife’s alleged infidelity read: “So me and the wife Faryal have agreed to split. I’m currently in Dubai. Wish her all the best.”

He however continued with a screenshot of a Snapchat conversation which he claimed was between his wife, Faryal and Anthony.

He added: “Faryal moved on quick. Always mentioned to me how much she wanted to be with another guy, from all people another boxer.” 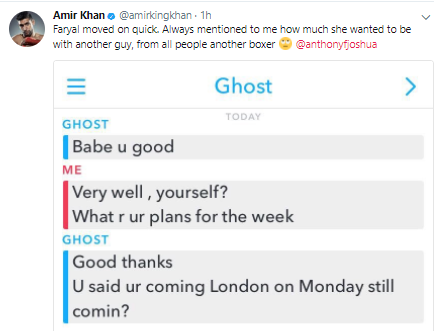 “Lol moved up in the weight classes lol. Trust me I ain’t the jealous type. No need to send me pictures of the men your talking to disgusted.”

“Left my family and friends for this Faryal. I’m not hurt but another fighter. I’m making it public. You getting the divorce Golddigger.”

“Mans like Joshua can have my left overs!” he added.

In reply to the series of tweets from her estranged husband, Faryal accused her husband of cheating on her.

She also mocked his boxing career adding that it is dead.

“I’m not sure if it’s your family tweeting for you. But I’m not the one who been in the papers for cheating.”

“I’m sure you left your family because they robbed you? Not because of me. Stop making false things up.”

“Accusing other boxers just because your boxing career is finished. Man up amir,” she added.

“After all these years. I’ve always defending a cheat, always stuck around for him, always had his back. And I’m called a gold digger?”

“LOL! He’s given me jack s*** — I pay house bills and bills for my daughter myself! It’s like I’m a single mother while he’s out messing.” 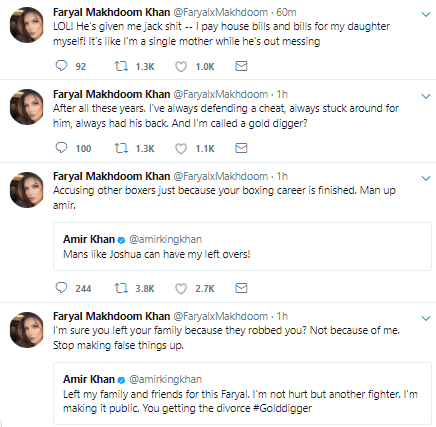 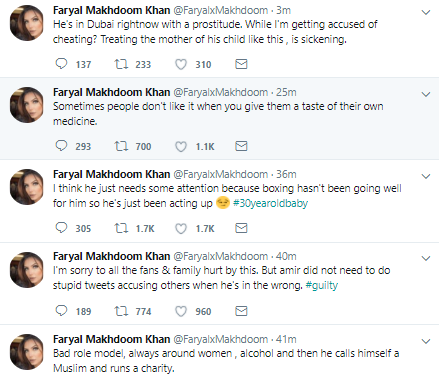 China to lend Zambia over $280 million to improve telecoms