President of Nigeria, Muhammadu Buhari, at a yet to be announced date.

READ ALSO: Shatta Wale Calls Himself A Proud Nigerian After Getting His Nigerian Passport

The Senior Special Assistant (SSA) to the President on Media and Publicity, Laolu Akande, made the disclosure while

briefing State House correspondents on behalf of the Minister of Sports, Sunday Dare.

Joshua reclaimed his IBF, WBAand WBO titles with a win via unanimous decision in his rematch against Andy Ruiz

Jr. on Saturday, December 7, 2019 which took place in Saudi Arabia.

Laolu Aknde however said the date is yet to be fixed.

He said: “The Minister of Sports announced that Anthony Joshua will be presenting his belts to the President in a

Joshua is born in England but to Nigerian parents which hail from Sagamu, Ogun State, Nigeria.

During the rematch, Anthony Joshua had an epic entry into the ring with songs from the legendary Late Fela Kuti

playing in the background. 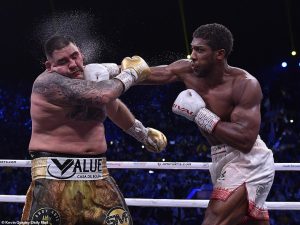