President Buhari’s campaign manager, Festus Keyamo has weighed in on the ongoing feud between Charly Boy and Deji Adeyanju in which the former admitted to having collected some money from him.

While being interviewed by Daily Trust, Keyamo stated that the claims were not true, adding that it was impossible for him to pay a dime for a diss song. 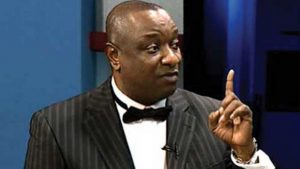 Before now, Charly Boy claimed that Keyamo visited him in his office and listened to one song he was planning to release before the election.  After listening, Keyamo paid him some money to release the song.

Although he did not mention the actual amount he received, Charly boy mentioned that the money was in “nine figures”, meaning the range is between a hundred million and about a billion.

He later released the song on his channel on YouTube on 25th of January but could not get it to trend as he would have wanted. The video has only about 7000 views and some comments.

“She wanted me”- private teacher insists after defiling underage girl

BBnaija Reunion: Alex weeps as Cee-C exposes how she had sex with Tobi after the show