A motorist was killed on Friday, October 20 during the launch of the campaign of the All Progressives Congress (APC) candidate Tony Nwoye.

The unidentified man was reported by Facebook user, Okutalukwe Chioma to have been shot dead after he tried to block the convoy.

She said “according to an eyewitness Mrs Onuorabuchi Okafor said the reason why the man was killed is because the man mistakenly blocked APC candidate Tony Nwonye’s convoy on the holdup and the police shot him in his Toyota Camry,”

Another eyewitness revealed that he appeared to have been struggling with the convoy before he was shot dead.

The convoy was said to have been heading to the mega rally at Onitsha when the unfortunate incident happened. 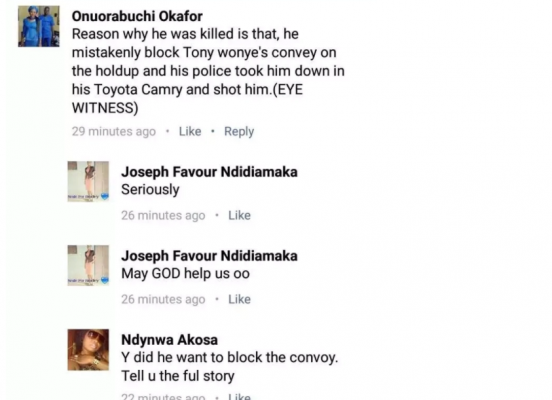 “So many people should be in prison” – Soyinka lampoons…

Tinubu afraid to speak against Buhari for selfish reasons – Afenifere