Aggrieved Nigerians have called for the arrest of Speaker, House of Representatives, Femi Gbajabiamila over the extra-judicial killing of a newspaper vendor shot by his security detail.

Ifeanyi Elechi met his untimely death after he got hit by a stray bullet fired by a security detail attached to Femi Gbajabiamila.

Although, Gbajabiamila announced the culprit who fired the killshot has been suspended in a thread of tweets, Nigerians have lashed out at the Speaker calling for his arrest and subsequent prosecution.

The unfortunate incident has been met with public outrage as concerned citizens lament the impunity with which security operatives continue to operate in the nation.

The police must immediately arrest Mr Femi Gbajabiamila, take him into custody for interrogation & prosecute him within 48 hours.

Mr Speaker is not protected by any immunity under the Nigerian laws.

The killers of a street vendor in Abuja yesterday must be brought to book. 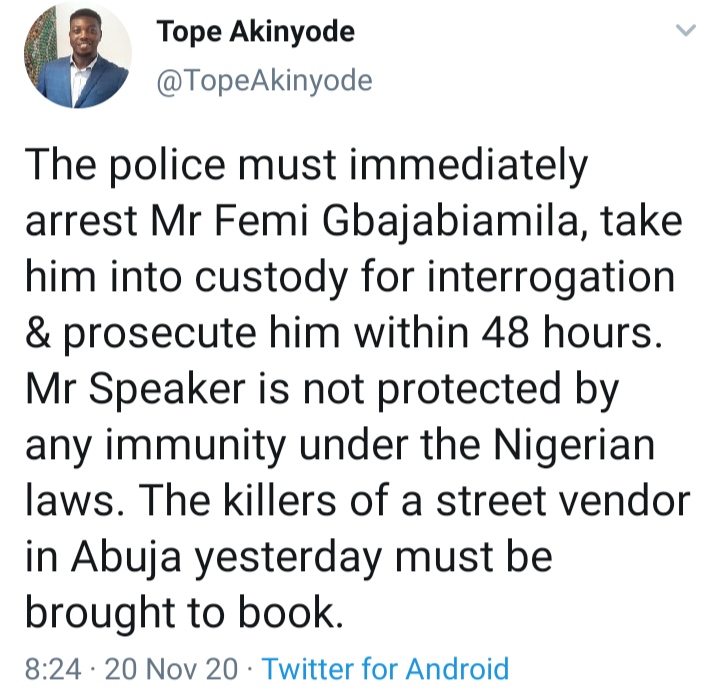 Even if he wasn’t the one that fired the bullet, he should be brought for questioning at least. Who ordered the shooting into the air?. He should drop his statement. No one is above the law

You are right sir, I am not a lawyer but if it were to be an ordinary Nigerian everyone will be attested by the police and give their statements.

Let him account for what he knows about it.

Why the gunshot?!who order it?

He was in the vehicle! Mr. Speaker was an eye witness and for all we know may have ordered the officer to open fire. Also why isn’t he calling for the officer’s prosecution?

He’s a party to the shooting and it won’t be extra of the police if he’s brought in for questioning. That’s all.

Bro you need to add this “Under a Lawless country called Nigeria” in US a speaker can’t get away with that ! In UK and else where by now he will be arrested and will be in dock by now . We don’t have to support what is wrong by saying he has some privilege! No .

You have to have an evidence and prove that he gave the order for the shoot. Otherwise your assumption is overreaching.

The thing is femi needs to be invited for questioning and he must provide the police,

We all know Femi, but we don’t know the police,So to get the police we need femi, and if the police is been prosecuted it will serve as lesson to other escorts.