The chances for Arsenal to participate in next season’s UEFA Champions League have increased as Manchester City is likely to lose their already booked spot.

The Pep Guardiola’s side is currently been investigated over a possible Financial Fair Play violation which may cost them the chance to contest in any European competition, come next season.

UEFA recently stated that explanations given by Manchester City about its finances are unconvincing, hence the need to check all transactions that are connected to the football club.

Meanwhile, Arsenal will be the huge benefactors, if the regulating body proceeds to ban the recently crowned Premier League winners. 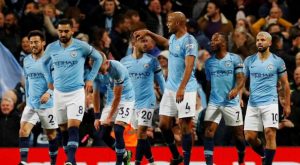 Before now, Manchester City has been rumored to have violated fair play rules. Football Leaks once released some documents that indicated it but it was not given any attention as many believed it only could have been a rumor.

However, UEFA launched a probe in March, and from findings, Manchester City is said to have hidden around £70million in funds from its owners – Abu Dhabi United Group

Since the report was published, Man City has denied the accusations, saying it was a speculation, “resulting from the illegal hacking and out of context publication of City emails”.

It then emphasized, “The accusations of financial irregularities are entirely false.”
Also, read: Microsoft to invest $100m on Nigeria, Kenya tech development hub

House foundation collapses on bricklayer working on it in Enugu

US suspends interview waivers for Nigerian seeking to renew their visas