Atiku shared a terse statement via Facebook and Twitter pages on Friday condemning the killing of Lawani and demanding justice in the matter.

“It is with deep pain that I learnt of the gruesome murder of a young Nigerian in Germany, Abdulsamad Lawani.

“My thoughts and prayers are with the family and friends and the Diaspora at this time of grief. May his soul rest in peace,” the former vice president said.

It is with deep pain that I learnt of the gruesome murder of a young Nigerian in Germany, Abdulsamad Lawani. My thoughts and prayers are with the family and friends and the Diaspora at this time of grief. May his soul rest in peace. -AA

However, many Nigerians took to the comment section of Atiku’s post on the two platforms to blast him for having the effrontery to condemn killing in a faraway land having failed to condemn the killing of a student, Deborah Samuel, for alleged blasphemy in Sokoto.

Recall that on May 12, 2022, Deborah Samuel, a Christian, was stoned to death before being set ablaze by a mob at the Shehu Shagari College of Education in Sokoto for allegedly posting a blasphemous statement against Prophet Mohammed.

The gruesome killing sent shock waves across the nation after videos of the incident made it to social media. 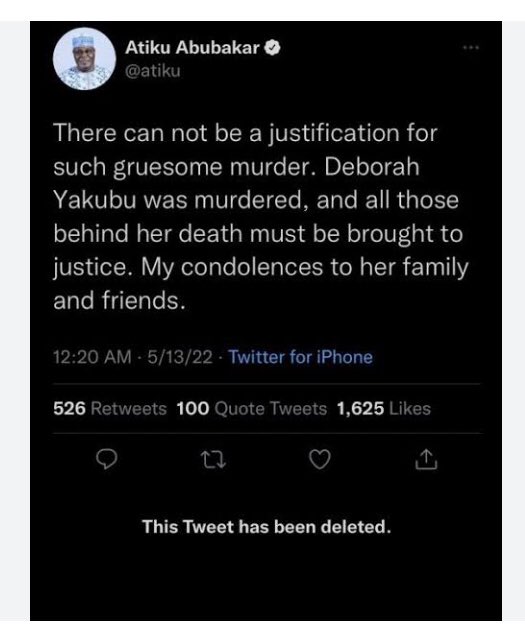 Atiku was severely trolled on social media after the statement, which he claimed did not get his approval, was deleted.

Many of those who condemned the former vice president for deleting the post accused him of pandering to murderous religious fanatics in the North for the sake of his political ambition.

After he shared the statement on Lawani’s killing, some commentators blasted him for the previous year’s incident.

Ifeanyi Nwafor wrote, “You can Approve this one because it happens in a foreign land but the one in your land you want to rule you couldn’t. Unifier under our feet.”

I personally can’t take you serious except you bring back this tweet. pic.twitter.com/3rGgQB20FU

It never took you time to write a condolences and approve of this tweet for the gentleman. But in Deborah death till date you still never said anything about it. How can we trust this country to you.?

You fit type Diaspora Buh you no fit type Deborah 👍

😆😆😆😆😆😆.
Make una dey see hypocrite of the highest order. See MuMu way dey form him care,same man who deleted tweet about the murder of DEBORAH some few months ago..

Baba our way be Nigerians eye 👀 done open reach back..

What of the family of Deborah 😭 😭 pic.twitter.com/WulgphD0jO