Alvaro Morata will not be part of Chelsea’s squad again, at least for the next 18 months. He has been signed on loan by Atletico Madrid in Spain.

Morata was a record signing for Chelsea in 2017. £60 million was paid to Real Madrid as a result of his performances when he was on a loan deal at Juventus. 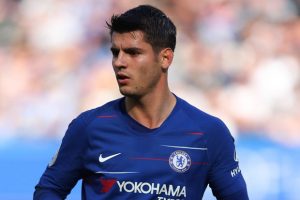 However, the 26 years old Spanish forward has not had regular playing time since Maurizio Sarri took over the management of Chelsea FC. His struggles in front of goal eventually forced Sarri to bring in another top striker for the club this January. And since the arrival of Gonzalo Higuain, it was only a matter of time before he’d be shown the way out of the club.

After Atletico were able to send their wing forward, Gelson Martins on loan to Monaco too, they expressly secured the services of Morata who is expected to be with them till the end of next season.

Atletico has now confirmed Morata’s signing via their Twitter handle.

Members of Lagos House of Assembly proceed to impeach Ambode

Why we rejected Ohanaeze Ndigbo’s endorsement of Atiku – Anambra Govt