Aaron Motsoaledi, who functions as South Africa’s Minister of Health, has banned the use of doggy style during intimate sex among sexual partners or couples.

According to a South African newspaper, Motsoaledi believes that doggy style is the leading cause of cancer and stroke in both men and women.

“The most energy consuming and stressful sexual position for men is doggy; Look, I’m only giving you guys a snippet but we will be posting the results of the full research on the ministry website.” He said.

However, Motsoaledi believes occasional doggy style sex especially on Christmas and on Valentine’s day may not be harmful, but each night maybe suicidal. 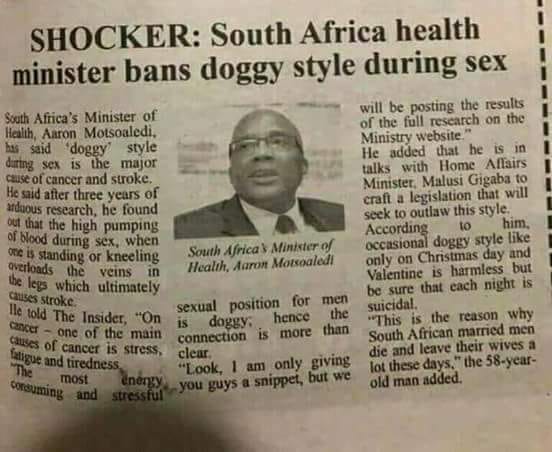 But according to a Zambian Sexual Reproductive expert, Sylvester Chongoa, women in Zambia view it as a useless law that can never be entertained in the country.

Sylvester Chongo said: ”Zambian women are lazy in bed and would always prefer doggy style for a man to do all the pushing, because they lack the skill to delightfully move it on top or underneath, and this laziness is the reason why Zambian women can never allow such law”

However, the question on everyone’s mind is; how will they know the style couples use behind closed doors?

Deforestation: Nigeria has lost 96 % of its forest – NCF

Defection: We can’t afford to have a one party state – Gbajabiamila