BB Naija: Miyonse And Tboss May Be Dating As Celebrity Chef Pens Poem

The relationship between Big Brother Naija housemates, Miyonse and Tboss is one which was made in the reality TV show house as the duo had been exchanging glances and a little more emotional tone before Miyinse’s eviction.

Sensing the connection between the two, Big Brother allowed evicted Miyonse send a birthday shoutout to Tboss who was still in the house, a move which completely lit up Tboss’ day.

However, the ex-housemate, Miyonse, clearly in love took to his social media page to pen a poem for the said woman, one which he did not reveal.

The celebrity Chef however left some hint as to whom the poem he composed was for as he failed to add a caption to the post.

According to Lailasblog, the poem is for none other than his in-house babe, Tboss.

The blog reported some hints which pointed all fingers to Tboss to include a poem photo showing a faint image of the former housemate, Tokunbo Idowu and a further hint as to their status given one of the lines in the poem which reads: “If I were given a chance to choose again, I will choose you a million times over because life is not worth living it without you in it.”

Fans however seemed interested as they shared comments on the poem: 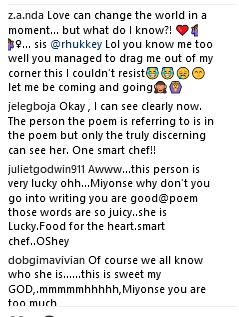 We Are Not Backing Nnamdi Kanu – Ohanaeze Ndigbo