Nigerians have reacted negatively to the amount of money that has been raised for ex-housemate, Erica after being disqualified.

Sadly, because she was disqualified, all cash prizes and gifts she won during her 49 days in the house were revoked.

Few hours after Erica’s disqualification from the show, her fans decided to set up a GoFundMe account to support her outside the house.

Read also: BBNaija: Why I Can’t Date Erica Outside The House – Kiddwaya 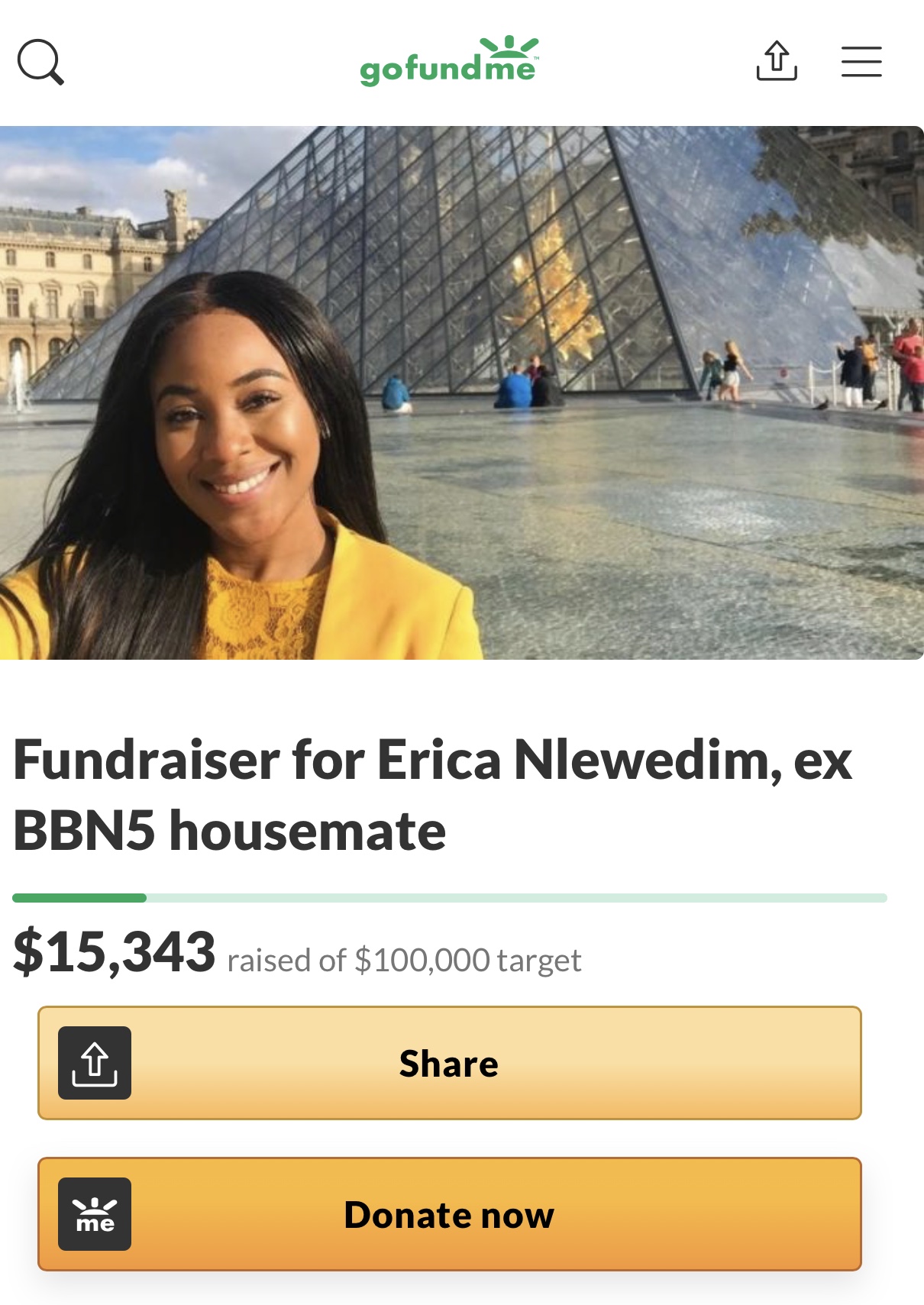 This, however, didn’t go well with some Nigerians who took to social media to shade her fans ‘Elites’ over what most of them termed a “misplaced priority”.

Below are some comments made by some Nigerians on Twitter, as gathered by DailyPost:

@Bowale “There are Gofundme for people’s tuition fees on Twitter that are yet to cross $2k after weeks. Well Erica’s own is almost at $3k after 2 hours. Nigerians know what they want and it’s why the country would remain stagnant.”

@Kofoworola “ In Nigeria we channel our energy to the wrong things Look at that gofundme for example.”

@BiolaKazeem “ Erica is going to get a $100k in gofundme despite doing all the things people here swore they hate and stand against.Many Gofundme for education and treatment can’t even hit $1000 despite aggressive campaigns.Not knocking anyone just a point about how we are a fascinating specie. “

@Posshh_ “ I bet some of the people donating money to Erica’s gofundme have relatives who are genuinely in need of help.”

@Ogbenidipo “ You say the government & private sector companies don’t take education and personal development serious. But not a single soul has created a gofundme for me or any careers & personal development coach on this app, with all the inspiring & empowering content we share. Is it fair?

@Sonjoe_kutuh “ They opened a GoFundMe account for Erica and you’re donating money, but your family and friends and neighbors are poor. You’re mad!

Skin_herball “ So you carry your hard earned money, inside this pandemic, with petrol @ 160, with all the troubles in this country donate to Erica’s GoFundMe?

@RealDreylo “ $6,000 has been raised for Erica GofundMe in less than an hour. Someone on IG has given her Benz already. If I no go Big Brother next year call me Dangothe.”

@Bervelyn “ The gofundme account has been set. Drop all your pain and worries into it. 100m or nothing or even more. Bombard her. All the haters complaining better mind your business. Star girl shall rise and smile again.This is just the beginning. ”

@Preshuhs “If you’re contributing to Erica’s GoFundMe and the people around you are starving, you are a disgrace.”

@Havillah007 “ All of u doing gofundme have families that are currently down financially and emotionally but will not notice or give attention..I cannot understand the basis for this.”.

Finding it hard to sleep in the heat? Try this