Despite being heavily criticized for having sex repeatedly in the house, Khafi, whose fans believe is being played by Gedoni in the Big Brother Naija house, does not seem to be slowing down.

As a matter of fact, news about the young UK Met police officer engaging in sexual activities on the TV show has been frowned at by her colleagues, back in the United Kingdom.

Her (khafi) latest sex romp with Gedoni happened right beside two other housemates, Frodd and Esther whose reactions showed they were equally stunned by the lover’s actions. 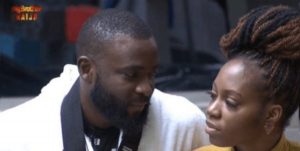 Although they tried to hide under a duvet in last night’s round of their sexual engagements, Esther continued to look on in dismay as she realized that the movements underneath the sheets were sexually suggestive.

See the video of the sex scene, as well as Esther’s reaction below.

Esther and Frodd watching Khafi and Gedoni under the Duvet 😃 #bbnaija pic.twitter.com/V1z5LJ4jPx