The Rivers State Government is allegedly campaigning for people to vote Marvis as the winner of the Big Brother Naija Reality TV show, through the Ministry of Culture and Tourism.

The royalty who is from Onne, Rivers State, who is among the final 5 housemates left in the house to compete for the competition’s N25M cash prize and SUV.

She alongside Bisola and Efe are considered real threats to winning the ultimate prize by fellow housemate TBoss.

In the letter dated 3rd of April, 2017 and signed by Michael Ejiohuo on behalf of
the Rivers State Commissioner for culture and tourism, it is expected that everyone within River state will support Marvis Nkpornwi to win the competition and also make Rivers State proud.

See the letter below, 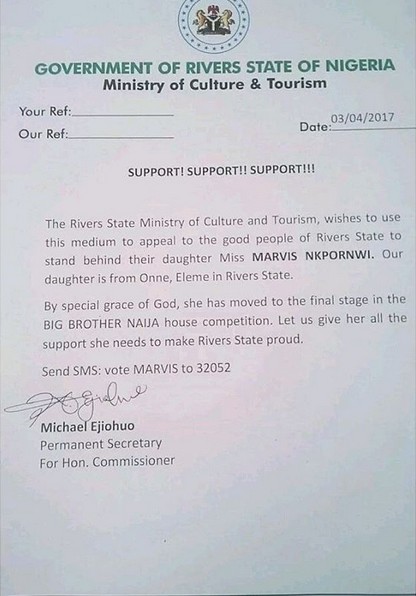 PHOTOS: Mercy Johnson Sworn In As SSA To Kogi Governor