The ongoing Big Brother Nigeria Reality Show took a rather controversial twist on Thursday as one of the contestants, ThinTallTony, stripped completely naked before his fellow housemates on television.

The contestant, born Offiong Edet Anthony, who has thus far been regarded as the most outspoken of the 12 housemates, stripped naked for ‘likes’ on Day 4 of the show.

This came after the voice of Big Brother, Biggie, urged the housemates to campaign for likes ahead of the first nomination show of the competition in which a housemate (or more) may be chosen for eviction from the Big Brother house.

While several housemates campaigned passionately with speeches and personal stories for likes, Tony gradually took off all his clothes, urging his mates not to be surprised.

With tears in his eyes, the light-skinned contestant said, “This is all I have left.

“Big Brother Naija na my last hope, I owe nobody any explanation for this nude act. I dey on my own.

He urged his fellow housemates to help him stay in the house for as long as possible.

Although the Akwa-Ibom state born completely went naked, viewers were not shown his full nude display but the other housemates who sat down watching him, burst into tears except Efe, ‘the Warri boy’ who doubles as the house master; he kept a straight face all through.

The act has, however, stirred up controversies and mixed reactions on social media. See a few of them below; 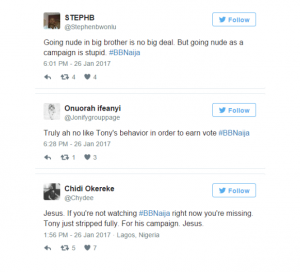 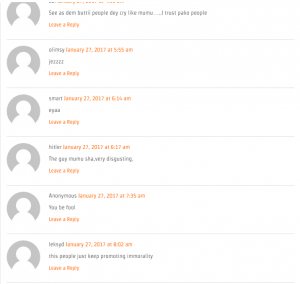 German population hits record high of 82.8 million due to migrants