As the season has started well in some of the World’s biggest competitions. The question is now, who’s going to win based on what we’ve seen so far?

Since summer the biggest football leagues in the world have been running with the new season. Even though the season is still young, we’ve already got some answers and knowledge on who will lift the trophies at the end of the season. Or maybe things will change. You never know, and that’s the beauty of football.

As the first quarter of the season has finished in the Premier League, three teams have started the big race for the title and left the 17 other clubs behind, as you can see at the standing: www.premierleague.com/tables.

It was already predicted that this year’s season in the best Italian football league would be tight. And it still is. Looking at the bookmakers’ odds it’s close to a dead race between Napoli, AC Milan, Inter, and Juventus. Napoli and AC Milan have taken an early lead, but neither of the teams has won in a decade, so the question is if there is the experience in the clubs to take it all the way to the championship title. So, despite weaker beginnings of the season, the bookmakers still have faith in Inter and Juventus.

2021/22 already looks like a season to forget about for Barcelona. The team is having trouble winning and is overtaken by clubs who should be miles behind Barcelona, according to the self-image of the club. Therefore, Real Madrid is the big favorite of the bookmakers to take the victory in La Liga this season. Atletico Madrid is also having fair odds, and even Sevilla is considered to have a better chance than Barcelona to win this year. 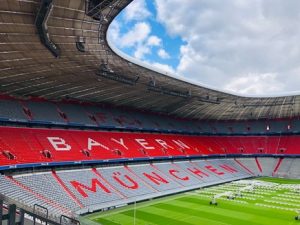 The bookmakers have no doubts about this year’s winner in the best German league: It’s going to be another Bayern Münich year. Despite a great start by Borussia Dortmund, Bayern Münich has started even better with lots of goals in the opponent’s goal – not behind Manuel Neuer. Just look at Bayern’s 5-1 win against Bayer Leverkusen, who also had a great start of the season – just not as good as Bayern Münich.

Maybe you have your own predictions of how the football leagues will end and who’s going to win? You can put a bet on almost every league in the world, and here we have just picked up four of the biggest leagues in Europe. You can visit www.betting.com to find even more betting tips and tutorials. With daily tips and comparisons to find the best odds, this is the place to go for betting enthusiasts.

Bandits rape 2, attack others in Kwara