Competition is a good thing, as it drives businesses to do their best; while monopoly renders people complacent and at times mediocre. It was therefore surprising to see some social media reactions to the leaked email sent by the MD of Seven-Up Bottling Company (Pepsi or SBC) to his team, with some alleging racism, monopoly, etc. Some even calling for government intervention. The debate showed how deeply ignorant many Nigerians are about competition dynamics and free-market economics.

For starters, it is important that we understand the ownership structure of Pepsi & Coca-Cola in Nigeria. Despite being international brands, they are bottled by indigenous companies, who are franchise owners of the brands – Seven-Up bottling Company (SBC) & Nigerian Bottling Company (NBC). Whilst SBC is the franchise bottler of Pepsi along with with 7up, Mirinda, Teem, etc., their main competitor, NBC is the franchise bottler of Coca-Cola, Fanta, Eva, etc. Both employ thousands of Nigerians and were quoted on the Nigerian Stock Exchange (NSE) – until SBC recently delisted, with hundreds of Nigerian shareholders owning various proportions of the businesses along with their foreign counterparts. SBC alone employs over 3000 people who are predominantly Nigerians. To, therefore, approach a competition debate involving them, from a foreign company vs. local company angle, requiring “government intervention”, to enable “indigenous companies” thrive is at best laughable and ignorant of how free-market economy and competitive strategy works. The leaked email was a simple operational tactic aimed at rousing the Pepsi team for competitive war.

These companies have maintained their investments in the Nigerian market and have enjoyed over five decades of success in the industry when other players either stayed away or failed. Both early competitors have had to consistently battle for market share; consistently innovating to capture and retain customers. It is also key to note that despite these two being the biggest players, the Carbonated Soft Drinks (CSD) industry is NOT a monopoly, and in fact has about 18 various product variants competing for customer wallets, both from the big and small players.

Interestingly, two of the new entrants’ emergence in recent times declared war on the incumbents – a brutal price war. Big Cola (a Peruvian brand) was one, while Bigi (a Nigerian brand) was the second, more enduring one. Bigi launched its CSD beverage into the market in 2016 (barely 3 years ago) with initial six flavors; tailored along the product-lines of the incumbents. Bigi’s market entry was brutal, they changed the market dynamics in terms of volumes and price, forcing the incumbents to either reduce prices or introduce new product variants at lower prices. 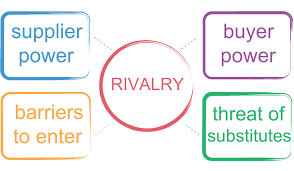 Using the Porter’s five forces of competition (see Figure 1), Bigi has made, and is continuously making the market unbearable for incumbents; their intensity of competition is getting fiercer; they have increased the threat of substitutes, increased the bargaining power of buyers which were hitherto low; and somewhat lowered the barriers to new entrants. This is not a market scenario that requires just back-patting from SBC; so, the email was at best a bonus-deserving one.

The A-Brand leaders in the Nigerian Carbonated Soft Drinks Industry are seriously facing threats of being disrupted, especially from a low-end market disruption standpoint, as the B-Brand players are targeting the Nigerian mass market (over 60% of whom are in the bottom of the pyramid), with more volumes and lower prices, with Bigi selling its 60cl drink at N100, while same goes for N150 for Coca-Cola and N100 for Pepsi’s 50cl. This is obviously yielding results as Rite Foods (makers of Bigi) has had to increase their production volume for soft drinks by over 300 percent to meet up with the increasing demand. Large incumbents are therefore in desperate need to review their route-to-market strategies to adopt more disruptive methods if they still intend to maintain leadership in the long term. To, therefore, expect SBC to fold their arms, while smaller competitors shrink its market share is at best ridiculous. To also isolate the use of the term “war” as a basis for criticism, is ignorant of strategy lingua. Competitive strategy is WAR – you win, or you struggle at best; and at worst, you die.

Now, from what I hear from the grapevine, I understand that the two organisations engaged the services of some online agents to push their agenda on social media. It is important that brands adopt a more strategic approach to social media engagements. If truly they engaged online agents to push their agenda via those silly narratives that I saw, then their agents may need to be fired- along with the Pepsi staff that leaked the mail.

So, every business has a Jekyll and Hyde character – good to the customers, evil to the competition. Perfectly normal. Competition only forces industry players to continuously innovate, stimulate competitive pricing, improve on quality and economic growth. Therefore, let the war continue, ultimately, we, the customers and the economy WIN!

I co-authored this article with Oluwaseun Afolayan

MURIC Supports Abolishing of Payments To Ex-Governors, Others

CIIN Enhances Technology to Remain in Business Since Advent of Pandemic

With pigeon incident, Nigerians had something to wail about – Femi Adesina

Wike In The Eyes Of History – By Paulinus Nsirim