Bishop David Oyedepo, Founder of Living Faith Church has reportedly being granted a US Visa after his initial denial on Thursday.

The Herald earlier reported that US embassy denied the popularly revered cleric a renewal of his American visa. According to reports, the embassy did not give any other reason except the standard default explanation that the Bishop did not qualify for visa renewal in its assessment and urged him to try again.

However, Obiwest Utchaychukwu, protege of Apostle Johnson Suleman has given an update on the issue. In a social media post, the protege revealed that Bishop Oyedepo was eventually offered the visa after he made a phone call.

“Update: Bishop David Oyedepo later got his US Visa after denial. Just a phone call, Visa was issued 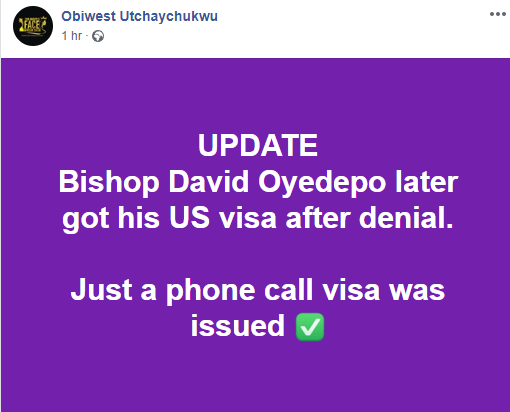 The Herald recalls the cleric immediately asked to make a phone call after he was denied the visa on Thursday but embassy officers allegedly declined stating phone calls were prohibited in the premises.