About 13 members of the Nigerian army have lost their lives, while a good number of others are currently nursing serious injuries as a result of an explosion that rocked their truck in Adamawa.

The soldiers had unknowingly bumped into a landmine set by Boko Haram terrorists.

Sahara Reporters reported that the troops were progressing towards Gwoza- Yamteke Road in Gwoza Local Government Area of the state when the incident occurred.

One of their trucks accidentally hit some explosives which had been concealed beneath the ground level.

The resulting explosion damaged the entire truck, leaving its parts scattered all over, and claimed the lives of many of its occupants. 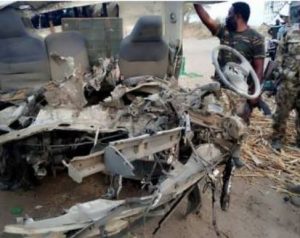 A security officer explained that eight soldiers lost their lives instantly while some others died moments later. Scores of others were injured but they had been taken to hospitals for treatment.

The officer stated, “A military Mitsubishi was truck struck by the IED device; the scene was horrible and the soldiers were critically wounded.”

According to Sahara Reporters, the shattered bodies of the victims were too gruesome to share, and the attack was an indication that the terrorists have devised new ways to carry out their attacks.

I don’t smoke or do drugs, I’m only a good actor” Slimcase reveals

Forget our support if you don’t understand Northern security problem –…