Ayo Afiolorunsho, a 19-year-old boy has narrated how joining a cultist group has ruined his life and brought shame to his parents.

Joshua was arrested by officers of the Nigeria Police Force, attached to the Oworoshoki area of Lagos State, based on the suspicion of being involved in illegal activities

And upon interrogation by the team, he confessed that he indeed belonged to a cult group popularly known as the Aiye Confraternity, adding that he now regrets his actions.

Narrating how Ayo landed in police custody, a police source stated, “The suspect was picked up at Oworoshoki area of the Third Mainland Bridge, as his group was planning a deadly attack on rival Eiye cult group. The suspect confessed that they went to Oworonsoki, after leaving a meeting at Obalende. He said that they were supposed to have another meeting at Oworoshoki when police appeared and arrested them all.

“The cultists, on sighting the police team, took to their heels. However, Afiolorunsho was arrested, in possession of a sword, which he said was for self-defense.” 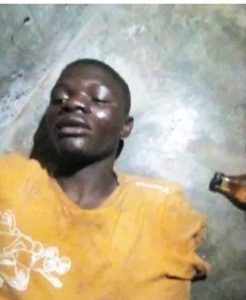 Ayo Afiolorunsho, who had been trained as a vulcanizer, explained how some older members of the cult group had taken him to Ikorodu for initiation and promised to stand by him at all times.

However, he had come to the realization that such statements were far from the truth.

He said, “There is nothing to gain from cultism. I regret being a member of Aiye. Those that forced me to join cultism made so many promises to me, but all were lies.  Since the police arrested me, not one member of the group under any guise has visited me. I am left to my fate.

“My parents are ashamed of me. I plead with youths to shun cultism. If I should regain my freedom, I would relocate to my village immediately and practice my trade. I have ruined my future with the group that I joined. I’m finished. My future is gone! I don’t know if I will ever leave the police custody.”

8-year-old pushed onto tracks, killed by oncoming train in Germany

2023: Fani-Kayode reveals what Tinubu will do to Obi, Datti, Obidients after winning