The Independent National Electoral Commission (INEC) had declared Ganduje, who contested the last gubernatorial poll under the platform of the All Progressives Congress (APC), winner of the election but Abba Yusuf, of the Peoples Democratic Party (PDP) has challenged his victory taking the matter to the Electoral Tribunal.

Yusuf had petitioned the Tribunal to disregard Ganduje’s elections claiming that the electoral process was riddled with gross irregularities.

But Ganduje, through his lawyers, told the court that the petitioners failed to prove that the election was rigged.

The governor and his party argued that the exhibits that were tendered by the petitioners were not certified true copies (CTC), asking the tribunal to dismiss the petition in its entirety.

Ganduje’s counsel, Offiong Offiong, submitted that Yusuf claim are not substantive and mere conjectures and therefore should be thrown out as the accusations are baseless.

In response to the submissions made by the respondent, Kanu Agabi, counsel to the petitioners, told the court to ignore the response from the respondents on the issues raised.

Agabi said the PDP candidate scored the highest number of votes during the March 9 election, but INEC refused to declare him the winner.

He pleaded that the rerun election held on March 23 be declared null and void, asking the tribunal to use results of the March 9 poll and return Yusuf as the winner of the election. 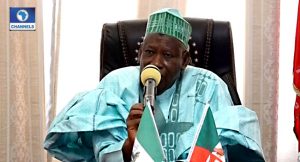 Kenyans mock Nigerian Ambassador to the US