As the battle for US Presidential election draws to an end, Bill Stepien, Campaign manager for Republican Presidential candidate,  Donald Trump has called for a recount of the votes recorded in Wisconsin following reports of irregularities.

Stepien made this known in a statement made available to newsmen.

He disclosed the irregularities in Wisconsin cast aspersions on the results, hence requested a recount to assure President Trump and his team that there was no foul play.

According to Stepien, opposition had resorted to devious means such as false public polling to suppress Trump’s supporters, he however noted the President remained undaunted and within his constitutional rights  to request for a recount.

“There have been reports of irregularies in several Wisconsin counties which raise serious doubts about the validity of the results. The President is well within the threshold to request a recount and we will immediately do so.” Stepien said 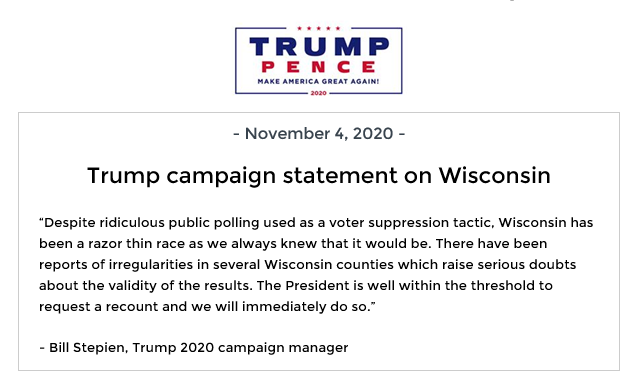 2 Nigerians win in US election