Brazilian President, Jair Bolsonaro, on Friday, told his supporters to buy a gun amid Impending Chaos.

Why on Earth would the Brazilian President tell supporters that “everyone should buy a rifle”? Is the unstable South American emerging economy, suffering from the virus pandemic, rapid food inflation, and out-of-control poverty about to stumble into further socio-economic chaos?

“Everybody has to buy a rifle, damn it! The armed people will never be enslaved. I know it costs a lot. An idiot says: ‘Ah, what you have to buy is beans,’ if you don’t want to, don’t buy the rifle, but do not come to disturb whoever wants to buy it,” Bolsonaro told reporters.

Latin American Telesur’s Nacho Lemus recorded video of the president telling supporters that “in a country with more than half of the population under food insecurity and in the midst of a new increase in the price of food, gasoline, gas, and electricity” now is the time to buy a gun.

Both murders and killings are on the rise in the country, exacerbated by the virus pandemic. A socio-economic economic collapse could be in the making.

The Brazilian Real has lost half its value in the past decade. The decline accelerated during the virus pandemic. 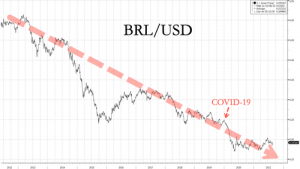 While the currency is collapsing, food prices in the country are hyperinflating. Recall what everyone’s favorite permabear, SocGen’s Albert Edwards said in late 2020 that rising food prices will trigger social chaos in emerging market economies first. 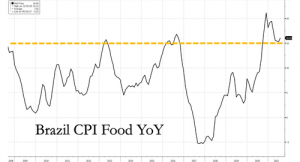 The country’s economy is spiraling out of control as Bolsonaro has already threatened to reject the 2022 presidential election’s outcome because he claims it will be rigged.

Bolsonaro promised supporters he would ease gun laws and that’s what he’s done since 2019. The president appears to be preparing supporters for further impending socio-economic chaos or political crisis.