An officer attached to the Lagos Police command was recently disgraced by a supposed sex worker whom he had had sexual intercourse with but refused to pay.

Reports state that the incident occurred around the Ibeju Lekki area of the state, as many residents watched the duo in dismay.

Before the disagreement, the officer is said to have agreed to pay the sex worker a sum of N7000 so that he could have her all night long, however, he declined to pay her when she was about to leave in the morning.

Angered by his actions, the lady began to harass him and dragged him around the area by his clothes. 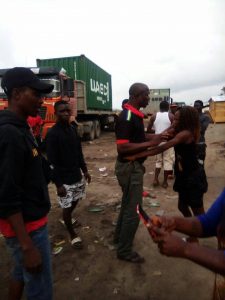 Eventually, some residents forced the officer to give the lady N4000, after seizing some of his properties.

Read what an eyewitness wrote about the incident below.

#Nigeriaforce…d mopol took d olosho home and agreed to pay her 7k 4 all night game.. Naso mata got changed dis morning.. He no want pay her anytin except 1k wey him b give d girl to pay her cabin room.. I even confronted d mopol myself to even respect his age and d uniform on him but all went adamant nt until we seized his face cap and torch light. He den remove 4k to pay d girl.. This happened dis morning at  IDASHO. IBEJU LEKKI 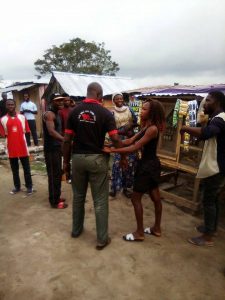