Former AC Milan star, Clarence Seedorf has been relieved of his duties as the head coach of Cameroon’s National Team – The Indomitable Lions.

This comes after the team had lost to the Super Eagles of Nigeria by three goals to two at the knockout stage of the AFCON competition in Egypt.

Seedorf and another former professional footballer, Patrick Kluvert, had begun to manage the team since August, last year. However, an unproductive campaign for the Lions was always going to end up with some consequences. 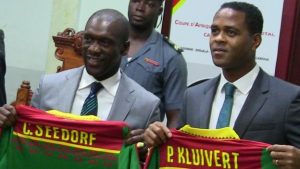 Kluvert was not spared as well, hence, both managers would have to look to other football bodies to continue their coaching careers.

A statement signed by the president of Cameroon’s Football Body, Fecafoot, stated, “After consulting the Fecafoot Executive Committee and the Ministry of Sports and Education, in the wake of the premature elimination of Cameroon senior male national team from the 2019 Africa Cup of Nations, the Cameroon Football Federation, in conformity with the stipulations of the resolutive condition of their respective employment contracts, has decided to terminate the duties of coach Clarence Clyde Seedorf and his assistant Patrick Stephan Kluivert with immediate effect.”

Kwara: It’s time to excel at fairness! – By Abdulrazaq Magaji