There have been different reactions since Cardi B announced her split from her husband, Offset. In fact, a good number of her fans think of the whole announcement as a publicity stunt. Many are of the opinion that the whole plan is to strategically publicize Offset’s new album which is due for release on 14th of December.

Others thought she was not being truthful, since they both showed PDA on the stage, at KIIS-FM’s Jingle Ball program some days before the announcement.
However, Cardi debunked such opinions via an Instagram Live session on Sunday. In the session which had over 100,000 Instagram viewers, Cardi B equally denied the rumor that her relationship with her ex was not real. 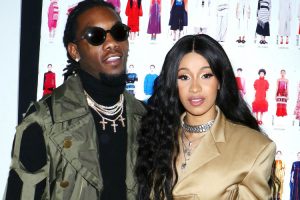 Cardi continued, “I’ve been seeing a lot of people say that my relationship was fake. Bitch, there are certain things called love. People do fall in love. Like, my relationship was never fake. I met this n—a, he was on my ass, I gave him a chance and we fell in love with each other. Things were not always gravy, ’cause at the end of the day, we are two different people. But we never did anything for f–king publicity, bitch. You think I got f**king pregnant, could have ruined my career for f**king publicity?”

Over 1,400 Flights Canceled Due to Snowstorm in The US