Caroline Danjuma shares photo of Tagbo with Davido and his friends

Nollywood actress Caroline Danjuma, who had earlier linked Davido to the death of a man named Tagbo, has gone ahead to share a beach photo of the late Tagbo along with Davido, his best friend, Ashley Ebong and lawyer Bobo Ajudua .

The actress, who has rejected claims that Tagbo drank himself to death, took to her Instagram page to mourn her late relative, as she calls for justice and says she won’t keep shut until Davido faces the law.

“You gave ur all .. when they needed ur assistance you were always there for them .. Tag you don’t deserve this .. this world is cruel .. I warned you but u were always acting mr nice ..now they labelled you an alcohol addict which is a big lie .. I won’t keep shut .. a glass of Henessy and cranberry gets u tipsy .. just a glass .. cool , calm and minding ur own biz was all you were .. all the lies they say now to cover up .. if only you could wake up and speak for urself .. I won’t keep shut …. only the wicked would act like it’s nothing … you called them your friend but they left you to die”

Davido has since dismissed the allegations leveled against him by the actress. 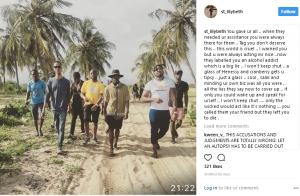